Mahaviracharya was 8th century Indian mathematician (Jain) from Gulbarga who asserted that the square root of a negative number did not exist. He gave the sum of a series whose terms are squares of a arithmetical progression and empirical progression and empirical rules for area and perimeter of an ellipse. He was patronised by the great Rashtrakuta king Amoghavarsha Nrupatunga.

Mahavira was the author of Ganit Sara Sangraha. He separated Astrology from Mathematics. He expanded on the same subjects Aryabhatta and Brahmagupta had worked on, but he expressed them more clearly.

The nine chapters of the Ganita Sara Samgraha are:

He is highly respected among Indian mathematicians, because of his establishment of terminology for concepts such as equilateral and isosceles triangle, rhombus, circles and semicircle. Mahavira’s eminence spread all over south India and his books proved inspirational to other mathematicians in South India. It was translated into Telugu by Pavaluri  Sanganna as Saara Sangraha Ganitam.

Mahavira also established equations for the sides and diagonals of cyclic quadrilateral.

If sides of cyclic quadrilateral are a,b,c,d and its diagonals are x and y while 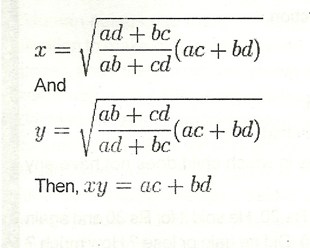